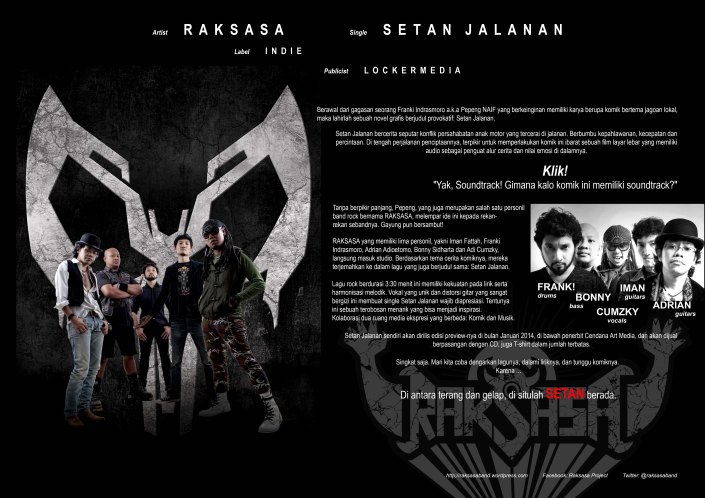 This entry was posted in News, Release, Uncategorized, Writings.

This entry was posted in Release.

Jakarta-based rock band Raksasa make no bones about its aspirations. With a name that translates as “Giant,” they recreate a gigantic take on classic rock that sounds tailor-made to fill up arenas and move fans. Taking their name from a 1989 album by Indonesian rock titans God Bless, Raksasa also bears more than a slight aural resemblance to that long-living crew.

On its self-titled debut record, the quintet’s aim is to bombastically bombard every inch of the body’s senses and hopefully get you going with loud guitars atop loud drums atop loud basses atop screeching vocals. It’s clear that Raksasa places little interest, for now, in dynamics. If anything, the band is slightly reminiscent of AC/DC in its minimalist, back-to-the-roots approach. This sonic particularity, along with the over-polished production quality, is both the record’s strength and weakness.

Made up of known players from various acts in the local music scene, Raksasa mostly relies on scorching, bluesy riffs courtesy of multi-instrumentalist Iman Fattah, from the bands Lain and Zeke and the Popo, and slide-guitar specialist and solo blues artist Adrian Adioetomo.

While the rhythm section of drummer Franki Indasmoro (from the massively successful retro pop act Naif) and bass player Bonny Sidharta (from a variety of heavy metal acts) handle their respective duties with admirably precise poundings, it is mostly the six-stringed instrument that commands the tracks’ dynamics.

Opening track “Insomnia” is imposing. Beginning with a rocketing build-up before diving into a blues-metal riffing evocative of ‘80s heavy metal, the song wouldn’t sound out of place in an early period Motley Crue record, complete with a sing-along chorus and call-and-response guitar solos.

For what it’s worth, lead singer Adi Cumzki’s screeching vocals would not sound out of place in the ‘80s Sunset Strip scene. His vocals, in particular, are a make or break for listeners who will either enjoy or deride the record.

“Badai Antariksa” (“Space Storms”) pulls further into rock’s history by conjuring the aural riffing of Blue Oyster Cult before diving into psychedelic territory for its jammy midsection. Its placing as the second track is an odd choice and stalls the opener’s momentum a tad.

“Nyalakan Apimu” (“Light Your Fire”) steers the air back into the arena, not only with that flicker-calling of a title but with an immediate riff and Adrian’s plentiful squelching guitar histrionics. With a breakdown that suddenly becomes whisper-quiet before swelling back up into really cool guitar lines, it makes for one of the record’s best moments.

The rest of the album mostly treads similar territory, with minor variations.

“Pesawatku Delay” (“My Airplane’s Delayed”) adds rockable rhythm onto the mix but is dragged down by the incessant repeat of its purposefully literal title line in the chorus. It’s an engaging shtick that wears out its welcome soon enough.

“Diculik ke Surga” (“Kidnapped to Heaven”) is a funkified version of Led Zeppelin’s “Black Dog” chock full with wah-wah guitar lines. “Seribu Tawon” (“A Thousand Bees”) is the record’s sole mellow moment, with one of the record’s slight left turns in the form of a seaside-ambient, harmony-laden breakdown.

With its debut, Raksasa aims for an attitude-driven introduction, hence the overall straightforwardness of the tracks which, save for a curveball here and there, run through the same motions of a classic rock record.

With Raksasa’s able and experienced members, conviction comes into play, resulting in many great basement jams that sometimes don’t translate well when put on record. To their credit, the members of Raksasa manage to mostly suppress their individual technicality and serve the songs’ arrangements. And for tracks inspired by jam sessions, there is enough here to come back to. There are far fewer discordant, masturbatory jams and far more complete songs than you would expect from a supergroup of sorts.

You do wish the band spent as much time in the generic sleeve as they did refining the songs, but as it is, Raksasa is an enjoyable, if particular, debut.

Raksasa is a new supergroup consisting of indie music movers and shakers: Adi Cumi (frontman of Fable) on vocal, Iman Fattah (Zeke and the Popo, Tika and the Dissidents) on guitar, Bonny Sidharta (Deadsquad) on bass, Pepeng (NAIF) on drums, and delta blues acitivist Adrian Adioetomo on guitar.

The fast tempo, progressive, yet listenable album consist of nine songs and distributed by demajors. While Adi Cumi himself did the artwork for the album.

This entry was posted in Reviews and tagged Reviews.